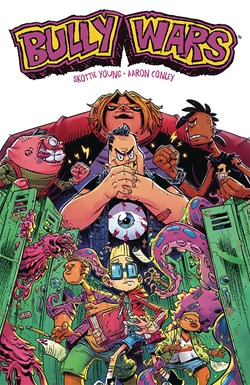 As Spencer, Edith, and Ernie prepare to enter high school in Rottenville they are well aware of all the bullying that will take place. Prepared and ready, Spencer has even brought some anti-bullying supplies. But just as they are planning their strategy for addressing bullies in high school their biggest bully since Kindergarten interrupts their plans and reminds them that in high school he will continue to be there #1 bully. More than that, Rufus promises to make his claim to bullying rights even more clear once they get to high school that first day: “The first day is the most important because it lets them all know that I’m the one that does the ruling.”

But things don’t quite work out for Rufus to become the biggest bully at Rottenville High. Instead, Rufus becomes the most bullied student on his first day of high school. High school bully “Hock” and his team of bullying misfits let Rufus know immediately that he will be bullied and not the bully. Hock’s buddy Troy even brags that Hock is indeed the winner of the last 3 years of the “Bully Wars” at Rottenville High so Rufus has no chance.

What are the Bully Wars?  Before Rufus can find out, his former bullied victims since Kindergarten step up to help him win the Bully Wars at Rottenville High.  But why?  Once you’ve been bullied for years you tend to think about the future opportunities for the bullying to stop, and Spencer believes that this new year in high school is the right time to team up with Rufus and help him defeat the new high school bullies, thus making an alliance with him to protect himself along with Edith and Ernie. Spencer has thought it all through, the perfect plan for Rufus to win the Bully Wars.

But when the grizzled and bully-crazed Coach, who organizes the Bully Wars at Rottenville High each year, learns of Spencer’s plan, he ups the stakes. He puts Spencer right in the middle of the Bully Wars and calls on all bullies to bring Spencer out of the Coach’s Rottenville High School maze. Will Rufus turn on Spencer (and Edith and Ernie) and chase the now main game winning prize of Spencer himself through the school or will he come to realize something else?  And what could that be from a lifelong bully?

Plot: Rufus has been the ruling Bully over Spencer, Edith, and Ernie since Kindergarten.  Now that they are entering Rottenville High, however, his dominance may come into question thanks to a clever scheme setup by Spencer.

Craft and Structure: CCSS.ELA-LITERACY.RL.8.4
Determine the meaning of words and phrases as they are used in a text, including figurative and connotative meanings; analyze the impact of specific word choices on meaning and tone, including analogies or allusions to other texts. Scott Free’s name comes into play immediately in Mister Miracle.  Without a prison or a trap that can hold him, he is able to escape anything “Scott Free” every time.  The greatest escape artist in the world, Scott Free is famously known as Mister Miracle on earth because of his abilities.

But will Mister Miracle’s heroic abilities really allow him to escape literally anything and everything, including death?

While Scott Free and his wife Big Barda have been living peacefully on earth, their home worlds of Apokolips and New Genesis have been waging an ongoing and intensifying war. As they try to maintain normalcy on earth Scott and Big Barda find out that Scott’s villainous, adoptive father Darkseid has discovered the Anti-Life Equation, a weaponized equation that will allow him to obtain total victory in war.

As the war rages on and on, and the heaping numbers of bodies mount on both sides, Scott realizes that only Mister Miracle can put a stop to Darkseid’s slaughter. Prepared to put his life, his family, and his famous career on the line, however, Mister Miracle shows signs that the Anti-Life Equation might already be at work in his mind. With the Anti-Equation manipulating his reality and damaging his life with Big Barda and their newborn son, Scott must face the probable fact that even Mister Miracle may not be able to escape death.

As Mister Miracle fights the Anti-Life Equation despite its constant interference with his reality, family, mind and thoughts, how much will he be able to take? Heroic enough to face his fears and Darkseid’s death path of destruction against all, Mister Miracle takes his chances and comes to face-to-face with whether or not he can survive the Anti-Life Equation, still stay connected to his family, and, on top of all that, end the wars.  Pretty ambitious for a famous escape artist from earth!

Plot: Scott Free is earth’s most famous Escape Artist (“Mister Miracle”).  Even Mister Miracle, however, might not be able to escape from the war between his home world and his wife’s home world, especially after his adopted father has figured out the Anti-Life Equation.

KEY IDEAS & DETAILS: CCSS.ELA-LITERACY.RL.11-12.2
Determine two or more themes or central ideas of a text and analyze their development over the course of the text, including how they interact and build on one another to produce a complex account; provide an objective summary of the text.

Lesson Plan Directions:
Ask students to choose three of the themes listed above.  With their three themes in mind, have them draw three large circles, each labeled with one of the themes of their choice.  After drawing the circles and labeling their chosen themes above each ask them to create a horizontal and rectangular box that falls below the circles and spans the width of all three of them.

In the three circles, students should write down whatever images (page #s and panel locations) and / or text (quotations) they come across while reading that aligns, demonstrates, and/or emphasizes the themes they have labeled above each circle.

When they are done reading, ask students to review their three thematic choices and in the large, horizontal rectangle below their circles, explain how the themes overlap or inform each other throughout the course of the story, creating a “Complex Account” as noted in the standard.