Sanford Greene's Got It Covered: The Art of 'Bitter Root'

It starts with a thumbnail. Well, more specifically, a proposal followed by the thumbnail above. "Chuck sparked the idea," artist Sanford Greene explains, getting us up to speed on his latest comic collaboration, Bitter Root. The "Chuck" he's referring to is writer Chuck Brown (Black Panther: Soul of a Machine), who along with David Walker (Luke Cage) shares writing credit on the newly released Image Comics series. "We spoke to David and he helped to flesh it out and made it amazing. He really knows how to make good ideas great."

And Bitter Root is quite an intersection of ideas. It dares to mix dysfunctional family drama with Ghostbusters. All under the artistic backdrop of the Harlem Renaissance. Those same story elements all came together for Sanford Greene when he was conceptualizing the cover art for issue #1. A process that involved a Japanese black ink called "Sumi" as well as super-pigmented acrylic speed ball ink. Sanford then took those inks to colorist Jarreaue Wimberley. In turn, Wimberly completed the eye-popping action shot that graces the cover of issue 1.

Get a complete look at the final version below. Well, we shouldn't say "final." Sanford Greene's goal was to capture "a family fighting together." Seeing how the Sangeryes clan has several members to focus on, you can expect Bitter Root's subsequent covers to connect - providing readers with one massive image of supernatural mayhem.

In the 1920s, the Harlem Renaissance is in full swing, and only the Sangerye Family can save New York-and the world-from the supernatural forces threatening to destroy humanity. But the once-great family of monster hunters has been torn apart by tragedies and conflicting moral codes. The Sangerye Family must heal the wounds of the past and move beyond their differences... or sit back and watch a force of unimaginable evil ravage the human race. 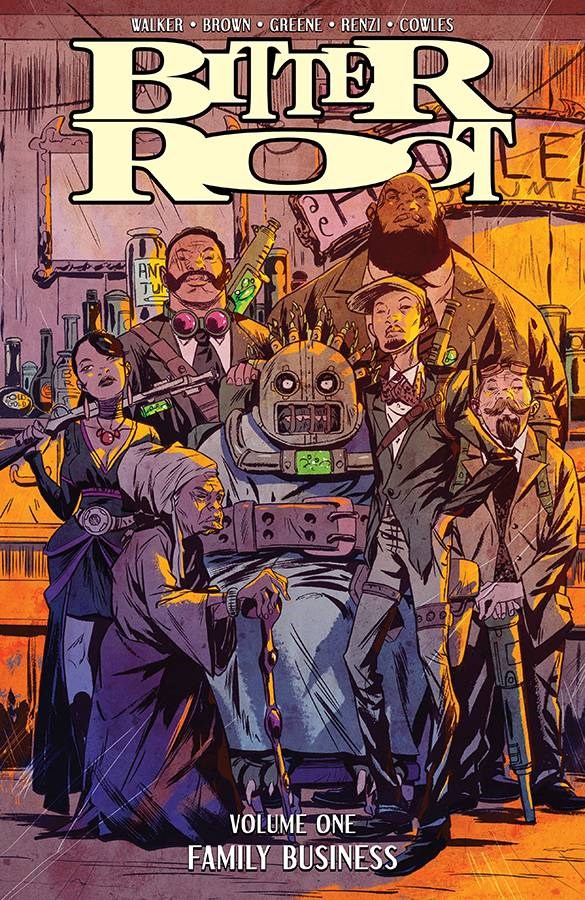 Troy-Jeffrey Allen is the producer and co-host of PREVIEWSworld Weekly. His comics work includes BAMN, Fight of the Century, the Harvey Award-nominated District Comics, and the Ringo Awards-nominated Magic Bullet.