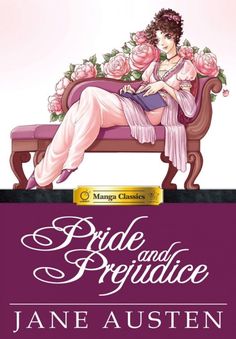 The Bennet family’s dynamic idiosyncrasies, Mr. Bingley’s light-hearted idealism, Mr. Darcy’s introverted sincerity, Mr. Collins’ hilarious rants, and many more of Pride and Prejudice’s most famous characters can all be found in this adaptation.  The only difference between Manga Classics’ Pride and Prejudice and Austen’s is the illustrations.  Thoughtful and respectful, the illustrations in this manga-based adaptation appeal to modern readers who, contemporary literacy research suggests, read more efficiently and effectively when print-text and image-text work together to tell the story.

After reviewing many other adaptations of literary classics over the years I can wholeheartedly tell you that this adaptation is by far the best adaptation I’ve ever come across.  I strongly and enthusiastically encourage readers of all ages to check it out.

Plot: Elizabeth Bennet understands how the world works, or so she thinks.  The main protagonist in the story, however, she is definitely not alone.  A host of unforgettable characters all seem to think they have 18th century marriage customs and traditions understood.  Bottom line: not everyone can be right!  And Elizabeth Bennet seems destined to fall into a situation or two where she must face her own beliefs about love and marriage head on.

Determine two or more themes or central ideas of a text and analyze their development over the course of the text, including how they interact and build on one another to produce a complex account; provide an objective summary of the text.

Analyze the impact of the author's choices regarding how to develop and relate elements of a story or drama (e.g., where a story is set, how the action is ordered, how the characters are introduced and developed.*

*The number(s) referenced above corresponds to the number used by the Common Core Standards (www.commoncore.org).

1. Ask students to break into pairs.

2. Next, ask students to select a theme: Rumors and Themes, Tradition and Modernism, Wealth and Power, True Love, Family and Friendship, Socio-economic Status.  Students should write their theme at the top of their piece of paper.

3. After selecting a theme students need to find three (of the best!) examples from the Manga-based Pride and Prejudice that best highlight that theme textually (with words only).  Students need to quote, record the page number, and offer a brief rationale for each example on a piece of paper.

4. When they are done listing their theme, identifying selections and accompanying page numbers students can now pass their piece of paper to another group.

5. Now in the hands of a new pair of students, the passed pieces of paper with theme identifiers and examples now need supporting images.  In short, the next pair of students need to find images to further support their peers’ selections and quotation identifiers.  This time, however, pairs of students need to find images that BEST support the selected theme on their paper; students cannot choose any of the images on the page that the first group selected quotations from.  This time, students need to recreate the images on their own and, finally, also list the page number.

As students present their peers’ findings educators can record those findings on the board, discussing overlaps and unique ideas as the move from pair-to-pair.