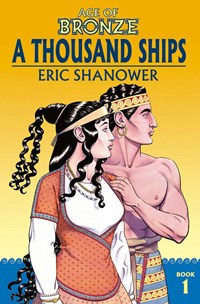 Reprinted in a new and brilliantly colorful edition, multiple Eisner Award-winner Eric Shanower’s Age of Bronze: A Thousand Ships presents readers with the first book in a trilogy leading to the Trojan War.

If you’ve ever wondered what led up to the Trojan War, Shanower provides some extremely thoughtful and historically-based answers. Telling the backstory of all of the famous characters we’ve loved and studied over time, Shanower includes more detail on some of our favorite historical names: Achilles, Odysseus, Helen, Agamemnon, and many others.

In this new edition, Shanower starts by following a young Paris as he disregards fiery warnings that foretell danger if he chooses to go to Troy. Disregarding the warnings, Paris goes to Troy and finds a life of royalty he never knew existed. He discovers that he is the son of the King and Queen of Troy and is soon sent on an errand by the King to rescue the King’s sister. Instead of returning with the King’s sister, Paris falls in love with and abducts Queen Helen of Sparta. Meanwhile, readers learn the backstories of all the important characters who will play significant roles in the upcoming Trojan War.

With Paris traveling back to Troy with Queen Helen, he has no idea he has set into motion one of the most important events in Greek literature.

Plot: When Paris decides to leave his country home on Mount Ida for the great city of Troy he sets in motion dark prophecies foretold since his birth. After he abducts the beautiful Queen Helen of Sparta the Trojan War follows.

Common Core Standard(s)
Integration of Knowledge and Ideas:
CCSS.ELA-LITERACY.RL.11-12.7
Analyze multiple interpretations of a story, drama, or poem (e.g., recorded or live production of a play or recorded novel or poetry), evaluating how each version interprets the source text. (Include at least one play by Shakespeare and one play by an American dramatist.)

Usually, I like to write lesson plans that contain graphic organizers.  Due to the content and nature of Shanower’s Age of Bronze, however, I believe that the best lesson plan to pair with this text is one that offers educators and readers a chance to study some of the Greek Mythology referenced in the story.

When students are done reading, they can present what they researched alongside what they read in Age of Bronze.  This will help students be able to distinguish between multiple interpretations of the main characters.