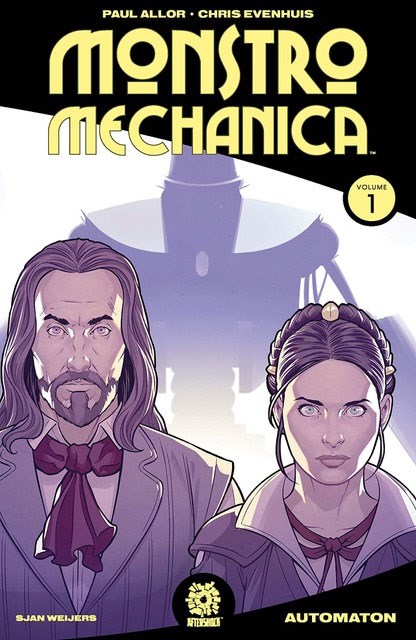 Set during the height of the Renaissance, Monstro Mechanica has warring factions setting out to gain control of Leonardo da Vinci’s arsenal of destructive inventions.

His latest invention, a wooden robot that acts as a bodyguard for his apprentice Isabel, is by far the most advanced and most dangerous.  Thus, it is sought after, hunted for by two sides that da Vinci is playing off each other in order to remain what he thinks is neutral.  Isabel does not agree with the inventor and believes that da Vinci should pick a side to believe in and only help the side he truly believes is right.  Da Vinci doesn’t seem to agree.

Only Isabel can protect the machine and its growing sentient intelligence from da Vinci himself, the Medici, and the Pope’s spies.  Ultimately, she will have to decide where her allegiance lies.

Plot: Leonardo da Vinci has invented a large wooden robot and there are two warring factions after it.  Only his young apprentice Isabel seems to know right from wrong, and thus she must decide both her own and the robot’s futures.

Craft and Structure / CCSS.ELA-LITERACY.RL.7.6
Analyze how an author develops and contrasts the points of view of different characters or narrators in a text.

Encourage students to keep both textual and visual notes to highlight the various characters points of view.

After reading, students can use their notes to discuss the various points of view that are key to comprehending the story.