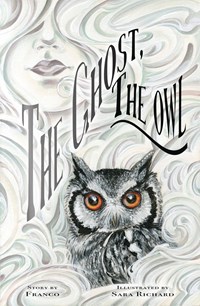 When Elenor, a ghost, finds herself alone in a forest and unsure of who she is she makes an unlikely friend: Aldus (or Mr. Owl).  Mr. Owl even wants to help Elenor out.  A tip from Mr. Crow leads them to a woman named Jessica.  Jessica seems to have a connection to the story’s events.

During an awkward interaction with a man trying to purchase Jessica’s home, Mr. Owl recognizes and shares with his new friends that Jessica is in fact the woman who rescued him as a baby owl.  Uncomfortable with how the man is treating Jessica Mr. Owl intervenes and scratches the strange man.  Even though he felt justified in protecting Jessica, Mr. Owl knows that his actions against the strange man are questionable so he goes before the parliament of owls to clear his name.

The parliament of owls forbid Mr. Owl from interacting with humans or ghosts. But when Mr. Owl leaves and learns that the man has returned to Jessica’s home, will he heed their advice or help Jessica again? And will Elenor ever learn who she is and how she is connected to Jessica?  Middle-level readers will really enjoy trying to put the pieces of this story together as they get to know Elenor, Jessica, and Mr. Owl more intimately.

Plot: When a ghost arrives unexpectedly, a curious owl tries to help Elenor discover who she is. After following a lead from Mr. Crow, they find Jessica, a lover of nature and its creatures. Jessica may be the connection between Mr. Owl and Elenor, but she’s also in trouble so they will have to decide quickly what to do next.

Common Core Standard(s)
Key Ideas and Details
CCSS.ELA-LITERACY.RL.8.1
Cite the textual evidence that most strongly supports an analysis of what the text says explicitly as well as inferences drawn from the text.

Because The Ghost, The Owl is such a suspenseful story it is helpful for students to track the decisions the characters make in order to resolve the story’s main conflict: Who is Elenor?  Identifying both the visual and textual clues about the character’s decisions in the story will help students track the story’s conflict and resolution.  The following graphic organizer allows students space to select and analyze the top ten decisions from the story.