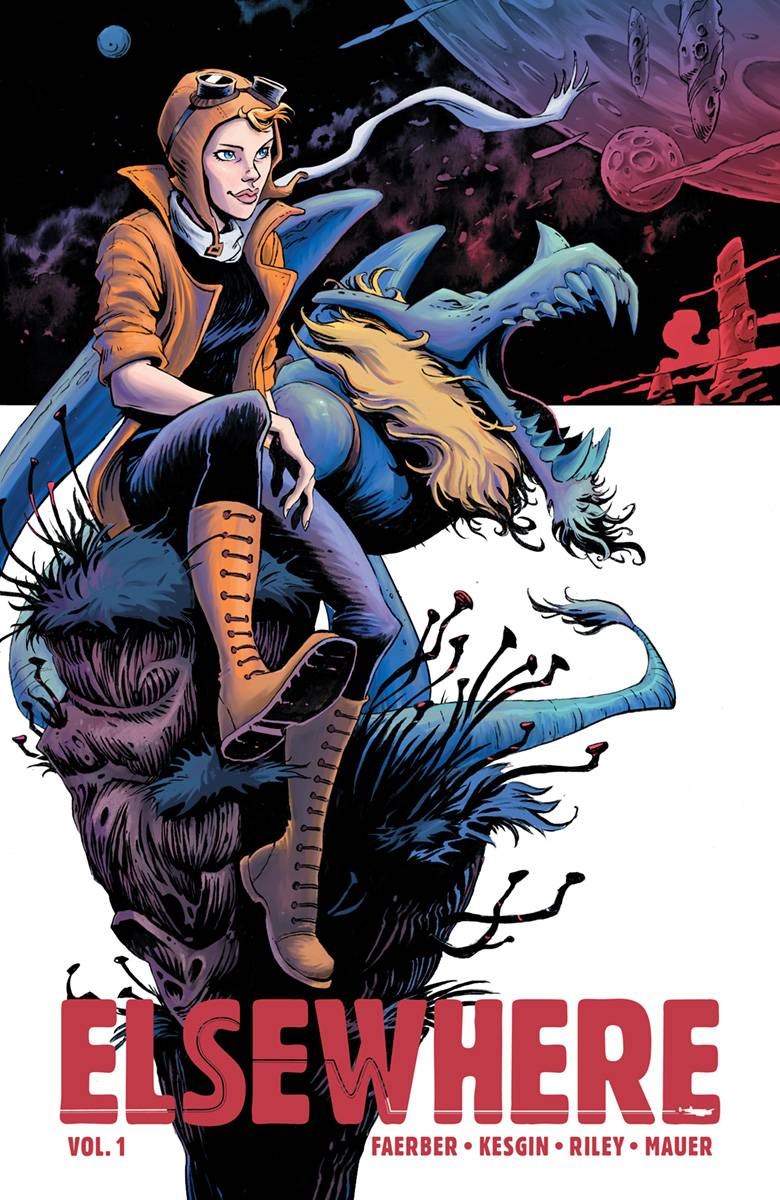 I’ve always been intrigued by the mystery and literary allure surrounding Amelia Earhart’s disappearance on July 19, 1937.  Movies, novels, television shows, and many more literary genres have attempted to tell her disappearance story in several ways.

Elsewhere, Volume 1 is now my all-time favorite Amelia Earhart story in any genre.  As an advocate of graphic novels I couldn’t be happier about this wonderfully written and well-constructed plot being coupled with beautiful art and design.

After they experience engine trouble, Amelia and her friend and navigator Fred abandon their plane and accidentally jump into a space-time warp.  And that’s just the beginning.  Split up as a result of the space-time warp, the story follows Amelia’s journey as she tries to maintain hope for finding her friend.

When Amelia meets Cort and Tavel they help her break into the fortress run by Lord Kragen in order to find Fred, but instead of finding Fred they find DB Cooper and escape with him instead.  Another nonfiction character who mysteriously disappeared from a plane later in history than Amelia (in 1971) Cooper’s motivations are a bit unclear to Amelia and to the reader.  Is he a good guy or a bad guy?  Will he help Amelia find Fred?  Or does he have other, secretive plans in mind?

If you are interested in Earhart and want a new and engaging story to stimulate your thoughts about her mysterious 1937 disappearance than get ready to think about where she may indeed be in this new and impressive graphic novel from Image Comics.  She could be elsewhere . . .

Plot: After experiencing engine trouble, Amelia Earhart and her navigator and friend, Fred Noonan, abandon their airplane and accidentally jump into a space-time warp. On the other side they are split up and Amelia finds herself in an unusual world where she can only hope to find her friend.

CCSS.ELA-LITERACY.RL.11-12.2
Determine two or more themes or central ideas of a text and analyze their development over the course of the text, including how they interact and build on one another to produce a complex account; provide an objective summary of the text.

Themes are an integral element of story for understanding the overall story emphasis and impact on the reader in this particular graphic novel.  For that reason and because themes play such a strong developmental role in this graphic novel students should track the development of at least 2 themes throughout the course of this text.  As they track theme development, student readers can also begin to note where 2 themes are both unique to themselves and similar to each other as well.

The following graphic organizer will help students track the development of two themes throughout Elsewhere, Volume 1.

Note: Students should select a theme from the list above or offer an alternative that the teacher sees as another good fit for this graphic novel.

Using quotations and/or images from specific pages to identify where each theme first appears and then is clearly developed and evident at least 3 more times throughout the story, students can track the development and similarities and/or differences (if any) between themes.  The total number of entries should be 4: one identifying the first, strong example of a theme and 3 more examples that help develop that particular theme throughout the graphic novel.

Based upon their identified themes and the development of those themes throughout the course of the story students can next provide an objective summary of the text in a short 5 paragraph essay.